A common concern among public is the presence 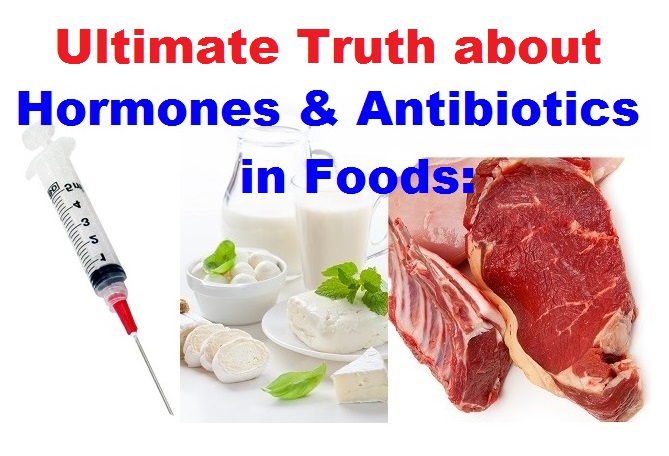 of biologically active substances, such as hormones and antibiotics, in foods. This is completely true and I am going to shed some light on this subject. Synthetic hormones and antibiotics have been used in farm animals to boost their production of food and dairy products. However, the alleged negative impacts on consumers, animals, and environment have challenged health authorities. In the cattle industry, they may feed the cows with three types of synthetic drugs for the following reasons:

a) To increase milk production with growth hormone.

b) To increase muscle growth and fatten livestock with steroid hormones.

c) To fight infections with antibiotics.

Let`s review those drugs one by one.

To produce more milk in dairy cattle, the FDA has allowed the use of recombinant bovine growth hormone (rbGH) in cattle since 1993. However, Canada, Japan, Australia and the European Union have banned the use of rbGH due to the alleged harmful effects on both animals and humans. What is the effect on animals? The use of artificial growth hormone in cattle increases milk production, which requires “frequent milking”. Frequent milking causes mastitis (bacterial infection of the udders) for which they have to use antibiotics. What are the effects on humans? There are no documented studies. Scientifically, the synthetic growth hormone given to cattle breaks down to IGF-I (Insulin Growth Factor – I) by the liver of the animal. Therefore, it is not easy to detect artificial growth hormone in meats or milk. The milk produced by rbGH given cattle contains IGF-I. Keep in mind that there are normally small amounts of IGF-I in humans and animals’ milks even if they are not fed by rbGH.

What happens if you drink milk from rbGH given cattle? Growth hormone, IGF-I, and Insulin are protein hormones. Proteins hormones are water –soluble and they are broken down in the stomach, and lose their ability to act in the body when eaten. This is why you never see growth hormone and insulin in the forms of pills or capsules. Protein hormones need to be injected to the body to make them work.

It is difficult to determine exactly how much of the rbGH remains in the meat or the milk, as it is not possible to differentiate between the hormones produced naturally by the animal and those given to the animal. With the knowledge I have in biochemistry, medicine, physiology and nutrition, personally I am not worried about rbGH and IGF-I in meat and milk. Even if there are small amounts of rbGH in meats, if you cook it properly, the heat would destroy it, as it is a water-soluble hormone. And your stomach acid will take care of the small amount of IGF-I in the milk. Besides, scientists know that rbGH is not recognized as a hormone by human cells. This is why FDA scientists allow the use of rbGH in dairy cattle in the USA. However, some countries have banned the use of growth hormone in cattle due to the alleged link between IGF-I and some cancers. Europe and Canada both have banned the sale of USA milk in their countries.

Steroid hormones are used to increase weight gain and muscle growth in cattle and fatten them. The FDA has approved the use of six steroid hormones in beef cattle and sheep, but not on poultry (chickens, turkeys, and ducks) and pigs. They are estradiol, progesterone, testosterone, zeranol, trenbolone acetate, and melengestrol acetate. Estradiol and progesterone are natural female sex hormones, and testosterone is the natural male sex hormone. Zeranol, trenbolone acetate and melengesterol acetate are synthetic steroid hormones that are used to promote growth and increase muscles and appetite in cattle.

Contrary to growth hormone and IGF-I, steroid hormones are not water-soluble. They are fat-soluble, making them resist against destruction by heating and stomach acid. Since estradiol, progesterone and testosterone are sex hormones made naturally by animals, it is not possible to differentiate between the hormones given to cattle from those made by the animal's own body. However, it is possible to detect the residues of zeranol and trembolone acetate in the animal's meat. FDA has set the tolerance levels for these hormones.

The main concern regarding the presence of steroid hormones or their residues in meats is early puberty in girls, which is considered a potential risk factor for breast cancer. The lack of large-scale epidemiological studies regarding the indirect effects of hormonal residues in foods has made this topic be highly controversial and debateable.

The presence of antibiotic residues in foods comes from the fact that cattle are given antibiotics. Can you imagine that 70% of the antibiotics used in the USA go to livestock and 70% of all large cattle feedlots incorporate antibiotics in the animals` daily food supply? Because of increased milking in growth hormone-fed cows, they may develop mastitis (infection of the udders) which requires extensive use of antibiotics for treatment.

The two main concerns regarding the presence of antibiotics in foods are:

a) The emerge of Superbugs (resistant strains of bacteria) in animals and the passage of these Superbugs through the food chain from animals to humans.

b) The occurrence of dysbiosis (imbalance between friendly bacteria and pathogenic bacteria in the gut).

At the end, here are my 10 suggestions:

2) Eat meats in moderation, well cooked, but not charred.

5) Avoid having organ meats especially the liver and kidneys.

6) Avoid having uncooked or undercooked meats of any kinds.

7) Avoid having chicken skins, as they may contain hormonal and antibiotic residues.

9) Use mostly yogurt than milk. Make your own yogurt, and when making it, heat the milk to the boiling point.

10) Add probiotics to your diet.

Executive Director of the Canadian Academy of Sports Nutrition