Tomato is from nightshade family. Though it is considered a vegetable, it is 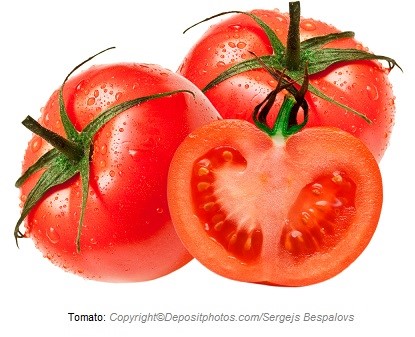 botanically a fruit. Tomatoes may come in different colors, such as green, red, yellow, and blue. One cup of chopped or sliced tomato contains 7 grams of carbohydrates, 2 grams of fiber and 2 grams of protein.

Average calories: 36 per one cup, sliced or chopped.

The carotenoids present in tomatoes include beta-carotene, lutein, zeaxanthin, lycopene, phytoene, and phytofluene. They are antioxidants that promote optimal health. Beta-carotene, lutein and zeaxanthin are essential for the eyes and protect them from age-related problems.

Phytoene and phytofluene, which are found in sweet potatoes as well, reduce the risk of developing prostate cancer and also accumulates in the skin, absorbing ultraviolet light from sun and showing anti-oxidative and anti-inflammatory properties.

Lycopene is a carotenoid pigment. It is an antioxidant that has a potential to prevent from prostate cancer. Other food sources of lycopene are carrots, gac, papayas, watermelon, grapefruit, and guava.

One of the distinctive phytonutrients in tomatoes is esculeoside A. It is a saponin that is believed to have a potential to increase bone density, relieve symptoms of menopause, fight cancer and lower cholesterol and triglyceride levels.

Other phytonutrients in tomatoes are naringenin and chalconaringenin. They are flavonoids that have anti-oxidative activities and can boost immune system.

Tomatoes also have 9-oxo-octadecadienoic acid that can help reduce cholesterol and triglyceride levels.

Like other vegetables from nightshade family (potatoes, peppers and eggplant), tomatoes contain solanine. It is an alkaloid toxin that the plant produces as a defence mechanism against insects and diseases. Solanine worsens inflammation. This is why tomatoes are not recommended in any inflammation or sports injuries, such as strains and sprains, arthritis, bursitis, and tendinitis.