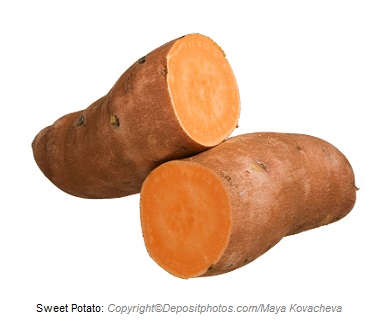 A medium sweet potato weighs about 115 grams and contains 24 grams of carbohydrates, 4 grams of fiber, and 2 grams of protein.

Average calories: 104 per one medium.

Carotenoids are powerful antioxidants essential for optimal health of the eyes and demonstrate anti-cancer activities as well.

Anthocyanins are flavonoids that scavenge free radicals, fight cancers, reduce inflammation and boost the immune system. Peonidin is a unique anthocyanin in sweet potatoes. Other sources of peonidin are cranberries, blueberries, cherries, plums and red grapes.

Squalene is a triterpene phytochemical that acts as a precursor for steroid hormones and is used as a skin moisturizer in cosmetics and as an adjuvant in vaccines. It is found in summer squash, olives, wheat germ, amaranth, and rice bran as well.

Found also in beets and spinach, betaine is a chemical compound in sweet potato. A medium sweet potato contains about 40 mg of betaine. It functions along with vitamins B12, B9 and B6 to lower homocysteine level. Homocysteine increases risk of cardiovascular diseases. Betaine may have a protective effect against deposition of fats in the liver (fatty liver).

Phytoene is a type of carotenoid, which is found in tomatoes as well. It reduces the risk of developing prostate cancer and also accumulates in the skin, absorbing ultraviolet light from sun and showing anti-oxidative and anti-inflammatory properties.

Isoquercetin is also found in mangoes and rhubarbs. It is a flavonoid that demonstrates anti-inflammatory and anti-cancer activities.

Because of lower glycemic index (GI), sweet potatoes could be consumed by people with diabetes to adjust their blood sugar levels.