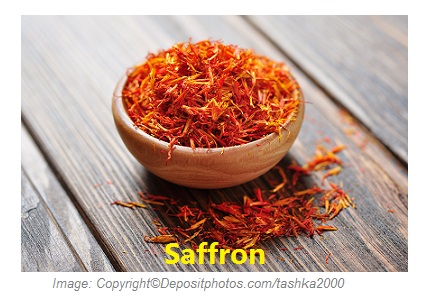 Crocus sativus known as saffron flower. The reason for being the world's most costly spice by weight is the stigma, the portion of the flower used for cooking and must be hand-picked off the flowers. To obtain one gram of saffron, at least 150 flowers are needed.

Saffron contains over 150 volatile aromatic and non-volatile active ingredients. It is rich in carotenoids such as alpha - carotene, alpha - crocin, beta - carotene, lycopene, and zeaxanthin. The golden yellow color of saffron is mainly due to alpha - crocin.

Another ingredient in saffron is picrocrocin, which involves in flavoring the spice. The main contributing ingredients to the aroma of saffron are safranal (a volatile oil) and trimethyl cyclohexadien.

Saffron is also a powerhouse of many vitamins and minerals.

Despite its culinary uses, saffron has been at the center of many medical research 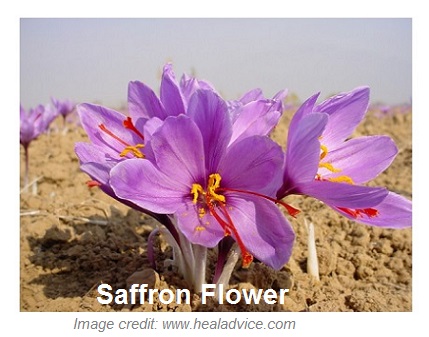 works and has been used in Persian traditional medicine and Ayurvedic medicine for long time. The health benefits of saffron are:

1) Depression: one of the amazing effects of saffron is to elevate mood. studies show that saffron is effective in mild to moderate depression with one study demonstrating efficacy equal to Prozac.

2) Weight management: saffron extract is extensively used in bariatric medicine during a weight loss program to control hunger and craving for carbohydrates. It has high efficacy in suppressing appetite in "emotional eaters" as well.

3) Eye disorders: saffron is rich in zeaxanthin. It is a type of carotenoid that has antioxidant activity as well and naturally presents in the retina of the eye. Saffron is beneficial in age - related macular degeneration (AMD) and cataracts and slows down their progression.

4) Premenstrual syndrome (PMS): a double-blind placebo-controlled trial showed that saffron extract reduced the severity of symptoms of PMS up to 50% compared to placebo group.

7) Alzheimer's disease: the active ingredient crocin shows a potent antioxidant activity on the nervous system and has been used in people with Alzheimer`s disease.

Consuming saffron extract for more than 2 months is discouraged. Possible side effects are headaches, dizziness, dry mouth and nausea. Larger doses may cause "saffron poisoning", which is characterized by vomiting, yellow discoloration of the skin and eyes, numbness and mucosal bleeding. Death may occur with doses of 15 - 20 grams a day.