Bell pepper is a vegetable from nightshade family and closely related to tomatoes, 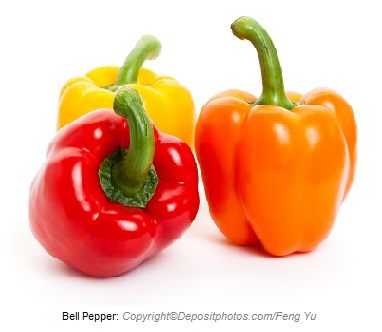 potatoes and eggplant. It is also called “sweet pepper”. There are many varieties, shapes, sizes and colors (green, yellow, red, purple and brown). One cup of chopped bell pepper contains 7 grams of carbohydrates, 3 grams of fiber and 1 gram of protein.

Average calories: 32 per one cup, chopped.

Carotenoids are powerful antioxidants that support healthy eyes and protect from age-related eye problems. Capsanthin and capsolutein are the main coloring carotenoids in bell peppers.

Flavonoids and phenolic compounds are potent antioxidants with anti-inflammatory, anti-cancer and immune-boosting properties.

One cup of chopped bell pepper contains 14 mg of phytosterols, especially stigmasterol and campesterol. They are plant sterols that can lower bad cholesterol and improve cardiovascular health.

The attributed health benefits of capsaicin are as follows:

Topical capsaicin is widely used by athletes to alleviate pain and discomfort from strains and sprains and to heat up as a pre-competition warm up. It is not banned in sports, but it is a prohibited substance in equestrian sports due to its analgesic effect.

Also found in carrots, navy beans and tomatoes, para-coumaric acid is found in significant amounts in green and red peppers. It is an antioxidant that reduces the formation of nitrosamines, demonstrating anti-cancer activity against stomach cancer.

The unique aroma of green peppers is due to an odor-producing compound called “methoxypyrazines”.

A distinctive phytonutrient in bell peppers is “Solanine”, which is produced by other vegetables from nightshade family, such as potatoes, tomatoes and eggplant. It is an alkaloid toxin that the plant produces as a defence mechanism against insects and diseases. Solanine worsens inflammation. This is why bell peppers are not recommended in any inflammation or sports injuries, such as strains and sprains, arthritis, bursitis, and tendinitis.