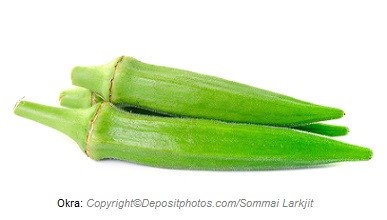 “lady`s finger”. One cup of uncooked okra contains 7 grams of carbohydrates, 3 grams of fiber and 2 grams of protein.

Average calories: 36 per one cup, uncooked.

Phytonutrients found in higher amounts and their health benefits: the phytochemicals in okra are phytosterols, carotenoids (beta-carotene, lutein and zeaxanthin), and flavonoids.

One cup of uncooked okra contains 24 mg of phytosterols. They are plant steroids that have capability to lower bad cholesterol and improve cardiovascular health

Carotenoids are antioxidants with protective effects on the eyes and they promote healthy vision.

A unique phytonutrient in okra is “gossypol”, which has been used as a male contraceptive in China for many years. Gossypol may lower infertility rate by affecting the motility of sperms. It also displays anti-cancer and antimalarial activities. Gossypol is found in other species of the mallow family, such as cotton and cacao.

Okra is very high in oxalic acid and may not be a suitable choice in people with kidney stones of calcium oxalate type.

Another distinctive feature of okra is that it contains a glycoprotein called “mucilage”. It makes okra become sticky and slimy when cooked. Mucilage can cover the mucosal membranes of the gastrointestinal system, protecting them from irritation and getting inflamed. Mucilage is found in flaxseeds, cactus, aloe vera, and kelp as well.