Okra May Cause Infertility:

Okra is a green vegetable from mallow family and it is sometimes called “lady`s finger”. 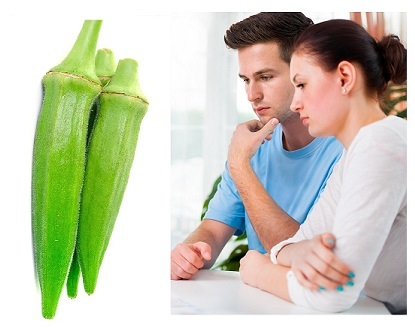 A unique substance in okra is “gossypol”. It is a polyphenolic compound that is mostly found in okra seeds. Gossypol is also found in other species of the mallow family, such as cotton and cacao, with cottonseeds containing the highest concentrations.

Gossypol inhibits sperm production and motility by blocking several enzymes that are highly important in energy metabolism in sperm and sperm - producing cells. It does not affect sex hormone levels or libido. Gossypol has been used as a male contraceptive in China for many years.

Few clinical researches were conducted regarding the effectiveness of gossypol in 1986 in China and in the mid 1990s in Brazil. The studies showed that gossypol lowered the number and motility of sperms and made small percentage of men infertile permanently. After publishing the clinical findings of these studies, world health organization (WHO) recommended to put an end to these researches.

Compared to cottonseeds, okra has a trace amount of gossypol. It may not affect a healthy person, but it could be a significant factor in men who are under investigation for their causes of infertility. Selenium or copper deficiencies may aggravate the anti-fertility activity of gossypol. In women, it may cause menstrual irregularity and amenorrhea.

Another side effect of gossypol is hypokalemia (decreased level of potassium in blood), which causes muscle weakness and fatigue and in severe cases, paralysis. This is why consuming higher amounts of okra by competing athletes is totally forbidden. Finally, gossypol may damage the red blood cells, causing hemolytic anemia.

In a nutshell, okra especially in higher amounts is not recommended in the following conditions:

1) Infertile men who are under medical investigation for infertility.

2) Women who complain of amenorrhea and irregular menses.

3) Hemolytic anemia, for any reasons.

4) Athletes who are going to compete at the highest level.