Mushroom is the fleshy and edible fruit part of a fungus. The most commonly 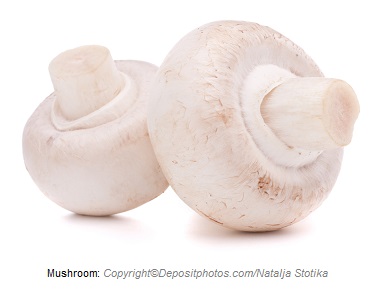 Nutritional constituents of mushrooms vary. One cup of sliced white or brown or Portobello mushroom weighs about 70 grams and provides 2 grams of carbohydrates, 2 grams of protein and 1 gram of fiber.

Average calories: 16 per one cup of white, brown or Portobello, sliced.

Phytonutrients found in higher amounts and their health benefits: the phytochemicals in mushrooms are beta-glucans, lucidenic acid, and ganoderic acid.

Ganoderic acid, found mostly in reishi mushroom, has an anti-cancer activity against liver cancer. This phytonutrient can also reduce the conversion of testosterone to dihydrotestosterone (DHT) by inhibiting the enzyme 5-alpha-reductase. DHT is blamed for hair loss and prostate enlargement in men.

White, brown, and field mushrooms contain lectins, which show antiviral and anti-cancer activities. Lectins are famous as “sticky proteins” as well. The problems with lectins are that they may aggravate inflammation and also attach to leptin receptors, leading to leptin resistance and compromising the weight loss programs.

One study has shown that Porcini or Cep mushroom has the highest levels of antioxidants among all mushrooms.

A unique phytochemical in mushrooms is ergosterol. It is a plant sterol that can convert into ergocalciferol upon exposure to ultraviolet light. Ergocalciferol is a pro-vitamin D and it is also called vitamin D2.

According to new studies, mushrooms are very rich in two antioxidants, ergothioneine and glutathione.