Eggplant is a purple vegetable from nightshade family and related to potato and tomato. 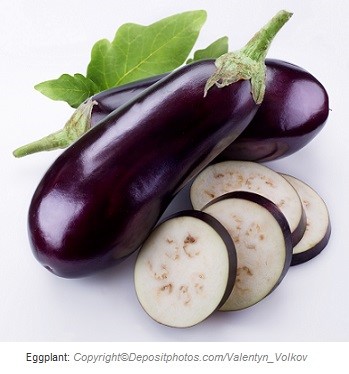 This vegetable is usually eaten cooked. It is also called “Aubergine” and “Guinea Squash”. A medium unpeeled eggplant weighs about 550 grams and it contains 32 grams of carbohydrates, 19 gram of fibre and 6 grams of protein.

Average calories: 152 per one medium eggplant.

Phytonutrients found in higher amounts and their health benefits: the phytochemicals in eggplants include phytosterols, flavonoids, phenolic compounds, carotenoids, tannins, delphinidin and aubergenone.

A medium eggplant contains 39 mg of phytosterols, especially beta-sitosterol and stigmasterol. They are plant steroids that have capability to lower bad cholesterol and improve cardiovascular health.

The flavonoid with significant amount in eggplant is nasunin, which is mostly found in eggplant skin. It is a potent antioxidant with anti-cancer activity.

Like flavonoids, phenolic compounds have antioxidant, anti-cancer, and immune-enhancing effects.

The blue-red color of eggplant is because of the phytonutrient “delphinidin”. It is an anthocyanin found in cranberries, Concord grapes and pomegranate as well. Delphinidin is a potent antioxidant.

Aubergenone is found in a diseased eggplant. It is an alkaloid toxin produced by the plant to protect itself.

A unique phytonutrient in eggplant is “Solanine”, which is produced by other vegetables from nightshade family, such as potato, tomato and pepper. It is an alkaloid toxin that the plant produces as a defence mechanism against insects and diseases. Solanine worsens inflammation. This is why eggplants should be avoided by those who have any inflammation or sports injuries, such as strains and sprains, arthritis, bursitis, and tendinitis.