Cabbage is a green or purple leafy vegetable from brassica family, and it is related to 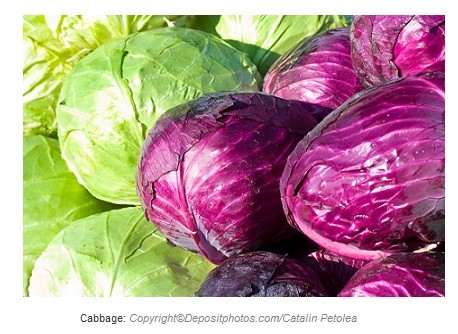 broccoli, cauliflower and Brussels sprouts. One cup of cabbage provides 9 grams of carbohydrates, 3 grams of fiber and 2 grams of protein.

Average calories: 44 per one cup.

Minerals found in higher amounts: manganese, potassium, calcium and iron. Cabbage is a good source of vanadium. It is a trace mineral that helps reduce blood sugar level and fights insulin resistance. It is also claimed to enhance athletic performance by increasing the uptake of creatine by the muscles. Other vegetables high in vanadium are mushrooms, radish, parsley, and dill. For more information about vanadium, see "Vanadium" under the section of "Minerals".

Phytonutrients found in higher amounts and their health benefits: the phytochemicals in cabbage are indole-3-carbinol, diindolylmethane, sulforaphane, isothiocyanates, carotenoids, and flavonoids.

Indole-3-carbinol is a phytonutrient that can reduce risk of developing estrogen-related cancers by altering the metabolism of estrogen and promoting DNA repair in cells. Indole-3-carbinole is also found in broccoli, cauliflower, Brussels sprouts, kale and collard greens.

Diindolylmethane (DIM) comes from the breakdown of indole-3-carbinol in the body and has anti-viral, anti-bacterial, anti-androgenic, anti-inflammatory, and anti-cancer properties. Showing angiogenesis-preventing effect, DIM shows activity against HPV (human papilloma virus) as well.

Isothiocyanates induce apoptosis (programmed cell death) in certain cancers. However, the downside of isothiocyanides is that they interfere with uptake of iodine, leading to goiter (enlargement of thyroid gland). Isothiocyanates can enhance liver detoxification by stimulating both phase I and phase II of detoxifying enzymes.

The three anti-cancer glucosinolates in cabbage are glucoraphanin (from red cabbage), sinigrin (from savoy and green cabbages), and glucotropaeolin (from green cabbage). Glucosinolates are sulfur-containing phytochemicals and when cabbage is cooked, they produce hydrogen sulfide (H2S) gas, which leads to flatulence.

Beta-carotene, lutein and zeaxanthin are the carotenoids found in significant amounts in broccoli. They are antioxidants with protective effects on the eyes.

Cabbages have a small amount of phytosterols, about 16 mg per one cup. They are plant sterols with ability to lower bad cholesterol and improve cardiovascular health.