32 Slang and Idioms in Sports and Fitness: 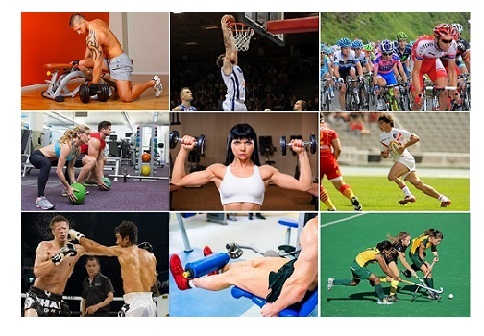 informal. They are more common in speech than writing. Slang evolves without respite in every aspect of human life, and sports and fitness are not an exception. We have collected 32 common slang and idioms in sports and fitness:

It refers to someone in the gym who walks around confused, barely working out, and staring mostly at the equipment without doing any things.

Example: This guy is in the gym for hours and he hardly exercises. He is in airplane mode.

It means the nose.

Example: He got hit in the beezer.

Used in Contact Sports such as Football, Ice Hockey and Boxing.

A deliberate unsporting action or remark against a defenseless opponent or vulnerable player with an intention of hurting the person is called "cheap shot".

Example: He hit the goalie unfairly and that was a cheap shot.

It means "to lose penile erection due to consuming the steroid Deca-Durabolin". Deca-Durabolin is the trade name of a commonly used steroid in bodybuilding―Nandrolone. One of the side effects of long-term use of higher doses of Nandrolone alone is to lose the ability to have a full penile erection, which steroid consumers refer to it as "deca dick".

Example: I got freaked out when I got Deca dick.

It means "inability to have a full penile erection due to long term consumption of any steroids".

Example: My cycle gave me a dick coma.

It means "vulnerability or susceptibility of a fighter to knockout punches".

Example: He lost the match because he had a glass jaw.

It refers to someone who spends a lot of time exercising in the gym. In the United Kingdom, it is also called "Gym Bunny".

Example: I am a gym rat working out for hours every day in the gym.

Used in Endurance Sports such as running and cycling.

It is sudden fatigue and loss of energy despite sufficient oxygen availability. It is usually due to the depletion of glycogen in the liver and muscles. Endurance athletes usually refer to this sudden sensation of fatigue and drained energy as "hitting the wall" or "bonking".

Example: During the Tour de France tournament, I hit the wall after 3 hours on day 12.

Used in Rugby and American Football.

It is a pass made to a teammate who has been marked to be tackled heavily, causing him to end up in the hospital due to injury sustained from the tackle.

Example: That was a hospital pass and you know it.

Used in All Sports.

It means "an ability to remain calm under pressure".

Example: He is an amazing wrestler with ice water in the veins.

It refers to "steroid".

Example: I can tell he is on juice.

It means "to take steroids".

Example: To grow your muscles fast, you need to juice up.

It refers to someone in the gym who sits on a machine for a long period until his next set blocking others from using the machine.

Example: This guy is a machine hog. We have warned him many times, but he doesn't listen.

Used in Soccer, Hockey and Basketball.

Throwing or kicking the ball between the legs of an opponent is called "nutmeg".

When someone cannot lose weight anymore despite following a diet and exercise programs, it is called "plateau".

Example: I lost 15 Ibs and then I hit a plateau.

It refers to visible and well-defined muscles.

Example: I am in the gym every day trying to get my body ripped.

It means "a gym packed with many big, muscular guys who train and lift heavy weights".

Example: I don't go to the Pars Fitness Club. It is nothing but a sausage factory.

Example: I hang out with friends and shoot hoops every Friday evening.

It is a strengthening exercise for the triceps. It is basically lying triceps extensions in which the exerciser lies on a flat bench, holds the barbell with a closed hand grip over the head, and bends the arms at the elbows to bring the barbell down close to the top of the forehead seemingly to crush the skull. This exercise is also known as "French Extensions".

Example: My triceps get usually sore when I do skull crushers than doing regular push-ups.

A shot in which a player jumps and thrusts the ball forcefully down through the basket is called "slam dunk".

Example: He did a slam dunk and shattered the glass.

It refers to a powerful and devastating blow to an opponent to knock him into next Sunday. It is basically a knockout punch.

Example: He got a Sunday punch a few days ago and is resting now.

It refers to flu-like symptoms such as fever, muscle soreness, and malaise developed following a testosterone shot or any other steroids.

Example: I don't use steroids anymore. I hate the test flu.

Example: His coach threw in the towel to stop the fight to prevent more injuries.

It means "to help someone with his heavy weight training in the gym either to get him back to the starting position or prevent him from injuring himself in case the weights slip or he fails to finish the move".

Example: I am going heavy for 7 reps, can I get a spot? Can you please spot me in my bench press?

Used in Fitness and All Sports.

It refers to vomiting forcibly from an intense workout or throwing up during exercise.

Example: I ate very close to my training. I feel terrible and I think I am going to toss my cookies.