Vitamin B3, also called niacin and nicotinic acid, is the only vitamin that can release 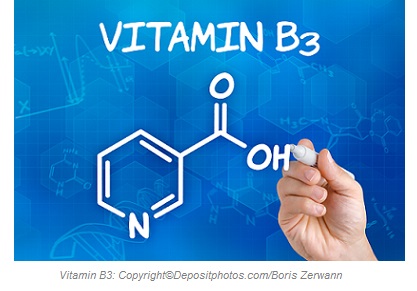 growth hormone. This water-soluble vitamin B plays a vital role in cell metabolism and helps the body release energy from protein, fat, and carbohydrate during metabolism.

Niacin deficiency results in a condition called pellagra, which in Italy, means thick skin. This disease manifests with symptoms and signs related to the skin, digestive system, and brain. It is usually characterized by a triad of dermatitis, diarrhea, and dementia (DDD, or 3D). Skin lesions include redness in exposed areas such as the hands, neck, and forehead. Inflammation of the mouth and intestine, diarrhea, swollen and red tongue, and increased salivation are digestive symptoms. Central nervous system problems can result from niacin shortage and may manifest as headaches, sleeplessness, memory impairment, and aggressive behaviors, and in severe cases, delusion, delirium, and dementia. Vitamin B3 deficiency may occur when corn is used as a major part of the diet, and in cases of amino acid imbalance, diarrheal diseases, alcoholism, liver diseases, prolonged treatment with Isoniazid (an anti-tuberculosis drug), Hartnup disease (a hereditary metabolic disorder), and some cancers.

Vitamin B3, Sports, and Longevity:

Vitamin B3 has some useful effects that other vitamins do not have. It can increase 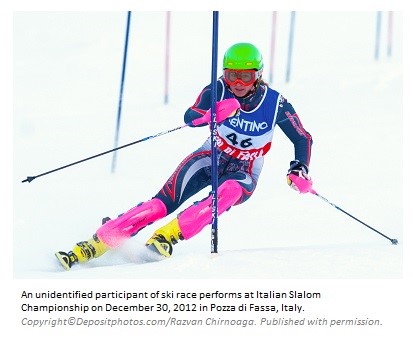 athletic performance and exert its anti-aging effect through the following four ways:

1. Scientific studies have revealed that vitamin B3 is a growth hormone releaser. The most potent form of vitamin B3, xanthinol nicotinate, can elevate growth hormone secretion. GH-releasing dosage of vitamin B3 is 200 to 1000 milligrams. Niacin and GH-stimulating amino acids have synergistic effects, that is, using both of them can increase the release of growth hormone more than using either one alone. For this reason, it is not surprising that niacin is a part of an amino acid stack.

2. Niacin can lower blood levels of LDL cholesterol by inhibiting the release of free fatty acids from the fat cells. Vitamin B3 contributes to longevity by lowering cholesterol levels and subsequently reducing death rate from cardiovascular diseases, and by improving memory and enhancing cognitive abilities.

3. NADH, an active form of vitamin B3, plays an important role in energy production at the cellular level. To produce more energy, the cell needs more NADH. Also, NADH regulates the release of growth hormone. Both increased energy production and GH secretion can increase physical performance.

4. Age-related sleeplessness can accelerate the aging process. Vitamin B3, along with vitamin B6, calcium and tryptophan, halts the aging process by affecting melatonin levels—a natural hormone also called “sleep hormone”.

Non – Athletic Benefits of Vitamin B3:

Vitamin B3 supplements can be used in cases of deficiency from natural sources. It may also be used to support the following conditions:

Food Sources of Vitamin B3: 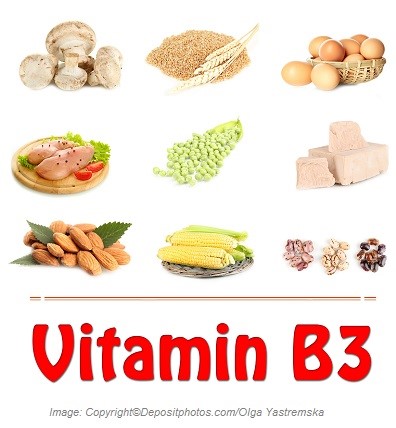 The recommended daily allowance for vitamin B3 is 13 to 15 mg. The suggested dosage for athletes is 20 to 100 mg. As mentioned earlier, GH-releasing dosage is 200 to 1000 mg. In treating high levels of cholesterol and triglyceride, niacin is prescribed at 300 mg per day in divided doses to be taken after meals. But it can be gradually increased to 1.5 to 4.5 grams per day.

Even though a low dose of niacin is almost always safe to take, high doses may cause some side effects, such as flushing, itching, burning or tingling sensations, headaches, and stomach upset.

The most frequent side effect of niacin is skin flushing, which is mediated by the release of prostaglandins D2 and E2. Flushing could occur when amounts as low as 50 to 100 mg are taken on an empty stomach.

The skin flushing is a harmless but bothersome reaction that usually starts within 10 – 20 minutes after taking niacin and often lasts up to 30 minutes. Flushing can be reduced by one of the followings: 1) starting at lower doses and gradually increasing to higher doses, 2) taking no-flush or sustained-released forms, 3) taking 300 mg of aspirin about 30 minutes before taking niacin, 4) taking 200 – 400 mg of Advil per day, and 5) taking niacin along with meals. Considering that GH-releasing dosage is high, consuming niacin with foods will reduce the incidence of the flushing. 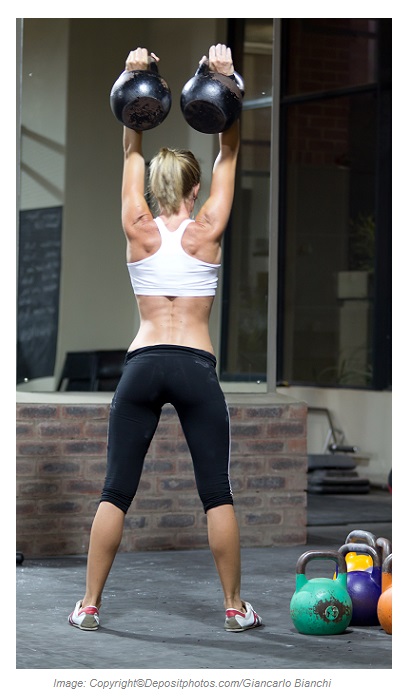 High doses of vitamin B3, more than 500 to 1000 mg per day, could cause inflammation of the stomach, and damage to the eyes and liver. It can also elevate blood levels of sugar and uric acid. Therefore, high doses of niacin should not be taken by people with peptic ulcer, active liver disease, diabetes, and gout.

Niacinamide, a form of vitamin B3, does not have anti-cholesterol activity and cannot cause flushing as niacin does.