Caffeine is an ubiquitous stimulant and the most widely consumed psychoactive 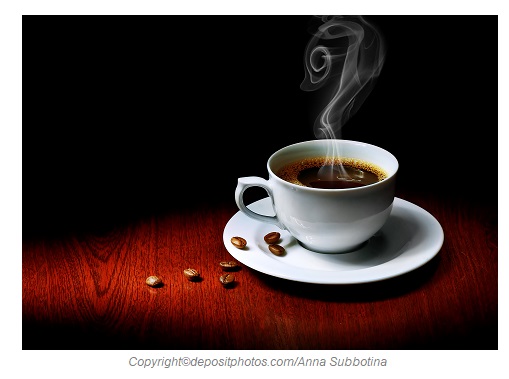 substance around the world. It is an alkaloid from methylxanthine class. Having a bitter taste, caffeine is mainly extracted from the plant Caffea Arabica (coffee bean). It is also naturally found in tea leaves, chocolate, cocoa beans, cola nuts, yerba mate (Paraguay tea) and guarana (Brazilian cocoa).

Caffeine demonstrates ergogenic effects and alertness enhancing activities―the two properties sought by public and athletes. The amount of caffeine in different food and drinks vary. The two most commonly consumed caffeine-containing drinks are coffee and tea. Depending on preparation, one cup of brewed coffee has about 80 to 140 mg of caffeine, brewed tea about 60 to 80 mg and caffeinated soft drinks about 40 to 60 mg.

Caffeine is rapidly absorbed from the gastrointestinal tract. Even though caffeine can enter into the blood stream through mucosal membranes of the mouth and stomach, most of the absorption takes place in the small intestine. Interestingly, 99% of caffeine is absorbed into the body and reaches to maximum concentration in the blood within 1 hour. Depending on factors such as obesity, pregnancy, use of birth control pills, smoking, altitude etc, the half life of caffeine is between 2 and 8 hours, which means it takes about 2 to 8 hours for caffeine to decease by 50% in the blood.

After being absorbed into the blood stream, caffeine is metabolized by the 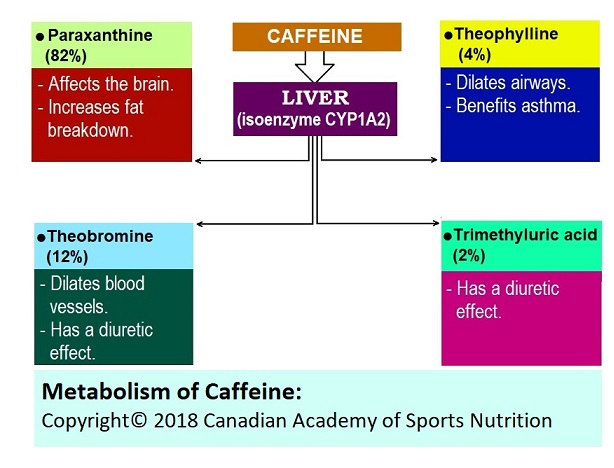 enzyme complex of Chytochrome P450 oxidase of the liver into the following metabolites:

Factors that have inhibiting effects on Cytochrome P450 isoenzyme CYP1A2 (Enzyme Inhibitors) are:

On the other hand, when the activity of the enzyme complex is increased, the clearance rate of caffeine is also increased, causing "caffeine high" to last for a short period.

Factors that have stimulating effects on Cytochrome P450 isoenzyme CYP1A2 (Enzyme Inducers) are:

Ergogenic Benefits of Caffeine in Sports:

Caffeine is extensively used by athletes of all levels. They take caffeine to "get up" for the sport events and enhance their mental alertness. Consuming caffeine used to be banned in sports and if the concentration of caffeine metabolite in urine was more than 12 mcg/ml, the athlete was accused of doping! Not anymore!

As of January 01, 2018, one of the two major changes in the prohibited list of substances in sports is that WADA (World Anti-Doping Agency) has placed caffeine in the "watch list", which means they will monitor the pattern of its misuse in sports.

Mechanisms for Ergogenic Effects of Caffeine: 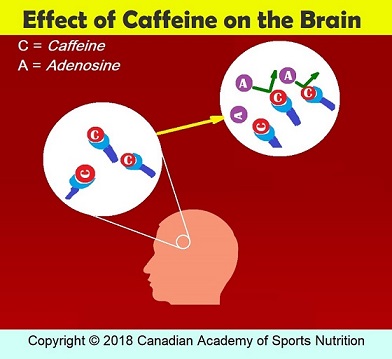 1) It is a CNS (central nervous system) stimulant. Decreased fatigue and drowsiness and enhanced alertness and wakefulness come from the stimulating effect of caffeine on the brain. Contrary to public beliefs, caffeine does not affect the brain directly. Instead, caffeine functions indirectly by blocking the receptors for adenosine. It is a neuromodulator substance in the body that plays a role in sleep-wake cycle and calms down the activity of neurons in the brain and spinal cord. Caffeine and its metabolites especially paraxanthine readily cross the blood-brain barrier to sit on adenosine receptors to inhibit adenosine from functioning, which leads to enhanced mental alertness, diminished fatigue and improved motor coordination.

2) Caffeine has a fat-burning effect, which plays a role in enhancing athletic performance. Caffeine can accelerate the breakdown of fats though the following two mechanisms:

a) Directly by affecting fat cells themselves

The breakdown of fats, directly or indirectly, releases free fatty acids into the blood. When the blood levels of free fatty acids (FFAs) are elevated, the body uses them as energy sources, sparing glycogen in the liver and muscles to be used later, which would improve endurance and delay fatigue.

3) Caffeine have a direct effect on exercising muscles. When caffeine blocks adenosine receptors, an elevation of Cyclic AMP in the muscle cells increases their permeability to calcium. Increased calcium influx leads to forceful muscle contractions. It appears that ergogenic effect of caffeine on muscles to be minimal in anaerobic exercises such as weightlifting and sprint. In other words, caffeine benefits endurance athletes more than strength athletes.

Many studies indicate that ingesting caffeine can mobilize FFAs (free fatty acids), conserving glycogen in the liver and muscles followed by enhancing athletic performance in endurance events. Moreover, caffeine does not interfere with "loading up glycogen stores" during carbohydrate loading for an endurance event. Interestingly, consuming high carbohydrate diet before exercise can blunt the lipolytic effect of caffeine. 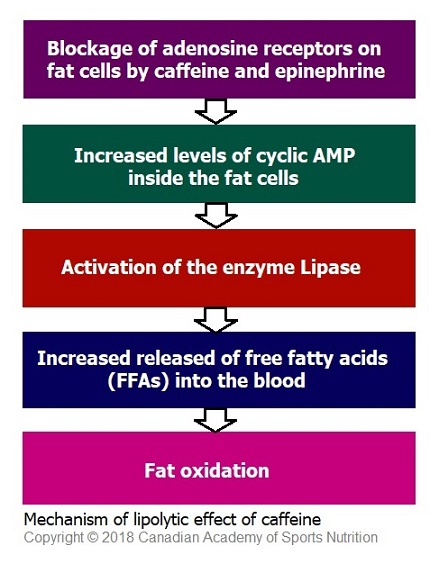 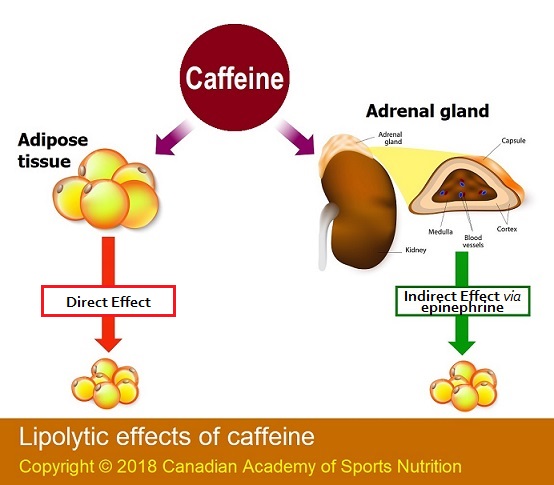 The Drawbacks of Caffeine:

Though caffeine has documented benefits on athletes and non-athletic people, it may have few disadvantages:

A) Caffeinism and Fetal Caffeine Overdose:

Caffeinism is a state of excessive stimulation of the central nervous system resulted from caffeine overdose. It is a condition due to consuming large quantities of caffeine, usually more than 1500 mg (1.5 g) a day, and characterized by unpleasant symptoms such as headaches, irritability, nervousness, insomnia, agitation, heart racing, diuresis (increased urination), muscle twitching, and tremors. Caffeinism may exacerbate previously diagnosed anxiety.

Caffeine could be deadly in extremely higher doses. In very large doses, it can be severely toxic, resulting in uncontrollable heart beats, vomiting, convulsions, coma and death. The LD50 for caffeine is 10 grams for a person with body weight of 70 kg. LD50 stands for "lethal dose 50". It is the amount of a substance that is sufficient to kill 50% of a population. Overall, caffeine with an oral dose of 150 mg/kg in adults can wreak havoc.

B) Caffeine Tolerance and Intolerance:

Ergogenic effects of caffeine are not consistent and one may develop tolerance to caffeine, requiring to increase consumption gradually. Imagine that you are a habitual caffeine user and you provide to your body a fixed amount of caffeine everyday to give you the "morning nudge". After a while, you realize that the same amount of caffeine does not generate the same effects as before and you are required to increase the amounts. This is called as "caffeine tolerance".

Can Caffeine Work Against Athletes? 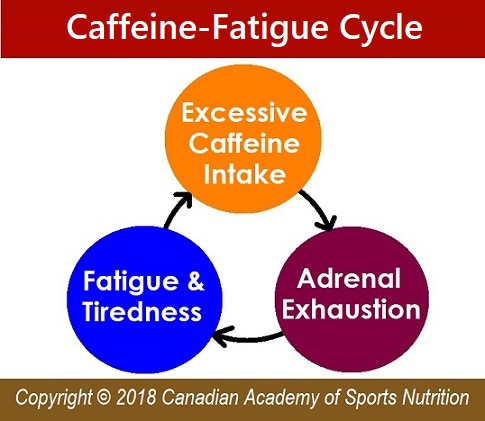 It has been proven that caffeine ingestion can blunt the ergogenic effects of creatine. Numerous studies indicate that concurrent supplementation of creatine and caffeine decreases significantly the potential benefits of creatine. The exact mechanism by which this interaction occurs is poorly understood. Researchers have suggested that the "interaction between caffeine and creatine" may be explained by opposing effects of caffeine and creatine on muscle relaxation time or their effects on gastrointestinal tract when consumed concurrently. Therefore, to optimize the ergogenic effects of creatine, athletes should avoid using caffeine during creatine supplementation.

Caffeine can lower the blood levels of potassium, resulting in a condition called "hypokalemia". The heart and skeletal muscles are very sensitive to the fluctuations of potassium in the blood. The negative effects of decreased potassium in the blood in athletes are a) increased risk of post-exercise muscle breakdown, b) tendency to post-exercise exhaustion, c) delayed recovery, and d) predisposition to muscle weakness and cramps.

There is a link between inadequate sleep and adrenal fatigue. Poor sleep resulted from too much coffee or caffeine may predispose an athlete to adrenal fatigue, which could prevent him from performing optimally. Another disadvantage of taking caffeine by athletes is failure to adjust jet lag, which contributes to poor athletic performance. Finally, caffeine depletes inositol (vitamin B8) stores from the body. It is an important vitamin in the metabolism of fatty acids and carbohydrates.

The Role of Caffeine in Modern Medicine:

The potential effects of caffeine on every single medical condition have not been fully studied yet. Caffeine may affect medical conditions in different ways. It may aggravate symptoms of certain conditions, while it could be beneficial in some and even may decrease the risk of developing some others.

Caffeine has a synergistic effect with painkillers, causing it to be added to some medicinal preparations. For instance, caffeine has been combined with aspirin and acetaminophen in the medication Excedrin, which is globally recommended for migraine and hypnic headache.

Depending on the amount and duration of caffeine ingestion, it may demonstrate opposing effects on certain medical conditions. The "paradox effect" of caffeine has been shown in diabetes, kidney stones and gout. Some research suggest that low dose of caffeine in short term may reduce the risk of gout by increasing urinary loss of uric acid. Other studies show that caffeine may actually trigger gout attacks by inducing dehydration. 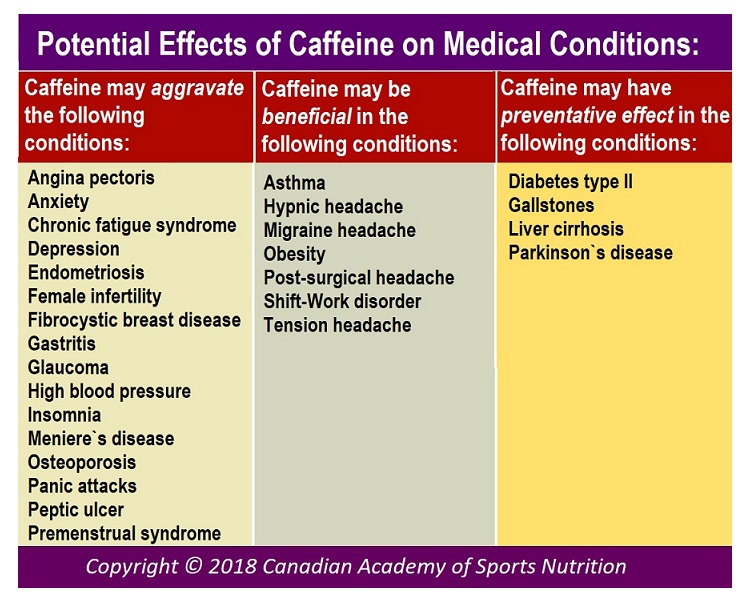 Interactions of Caffeine and Medications:

Caffeine has interactions with some medications: